What is a Liberty Elm?

The American Liberty Elm has more than 20 years record of street-testing. it is the only street-proven resistant elm with a Lifetime Warranty against Dutch elm disease.

Since 1983, volunteers around the country have been nurturing a new American elm – the Liberty Elm. They’ve planted over 300,000 of these trees in more than 1000 communities.

The Liberty Elm is not a hybrid. ERI’s American Liberty Elm is actually a group of six genetically different cultivars. All six look like classic, old fashioned American elms. “You have to look closely and know what you’re looking for to tell the difference among the six, ” says Hansel. “To be sure which one you have, you really need DNA analysis.” 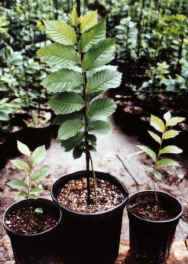 Genetic differences provide diversity. Having six cultivars in the series is insurance against all the elms being wiped out by any disease or problem, even one that might show up in the future. ERI mixes all six cultivars in its shipments.

In the research phase, it was extensively inoculated with 10 different isolates of the DED fungus and received natural exposure to fungus-carrying elm bark beetles. But the American Liberty Elm is now long past the experiment stages, and at this point it has been through the additional test of growing in public locations around the country for over 20 years, where it has been exposed naturally to DED fungus where it my occur in those environments.

There is no known American elm variety that can be called entirely immune to DED. The American Liberty Elm is resistant to DED, and its resistance has a strong record. In the 20+ years since the tree’s introduction, ERI has confirmed less than 180 cases of DED among the more than 300,000 elms it has sent out. Each elm carries a warranty against DED. ERI agrees to replace the tree if it succumbs to DED.

It’s been a rewarding grass roots effort to restore a portion of the 100 million American elms that succumbed to Dutch elm disease (DED) since the beetle-borne fungus first appeared in elms in the U.S. in the 1930s.